Wellbrock persevered to make a name for herself with Tiger Nation, showcasing her soccer skills that her family knew of all along.

Following a standout multi-sport career at Thomas More Prep-Marian High School in Hays, Wellbrock signed to play soccer with FHSU in 2017, making it easier for her family to attend her games.

After a breakout season for the Tiger women’s soccer team this fall, Wellbrock will graduate with a bachelor’s degree in health and human performance (HHP) on Friday. 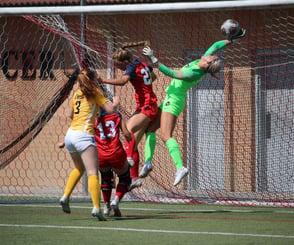 She will spend the next semester working at Herrman Physical Therapy in Hays as a physical therapist aide and planning her upcoming summer wedding. Then it’s off to Colby, where she will work on a degree in the PTA (physical therapist assistant) program at Colby Community College.

While reminiscing about her career as a Tiger, Wellbrock emphasized that her immediate family was her inspiration. So, too, was her extended family, which included FHSU coaches, faculty staff, teammates, and classmates.

“I’m a homebody and wanted to be near family,” she said. “I wanted to go into nursing, and the Fort Hays State nursing program has a great reputation. When I was offered a scholarship to play soccer here, I absolutely couldn’t pass it up.”

Fort Hays State seemed to have it all for Wellbrock. She got to play the sport she was introduced to as a baby when her older brother was excelling in soccer. She met her future husband on campus. And then there’s that college degree that she will have in hand this week.

However, the fairytale ending doesn’t mean it was always easy.

A four-year starter at goalkeeper for TMP-Marian, Wellbrock was accustomed to being on the field for the entire game. She helped lead the Monarchs into the state playoffs three years while earning all-state individual honors all four years.

She redshirted her first year at FHSU, a practice common for incoming freshmen, who practice with their team and get acclimated to the college game but don’t participate in outside competition. Then, she had to stand on the sidelines and watch the next couple of years as veteran goalkeepers led the Tigers’ back line. This was unfamiliar territory for Wellbrock, who also was questioning her major at the time.

With just one year left to complete requirements in the nursing program, Wellbrock decided to change majors. Discussions with her family ultimately helped her decide to remain in the healthcare field, and she switched to HHP with an emphasis in sport and exercise therapy.

“When it came to changing my major, having family here to talk to, just a two-minute drive away, was crucial,” she said. “And so many people at Fort Hays State helped me through that time, too.”

One of those, she said, was Blake Reynolds, the Tigers’ head coach.

“Changing her major completely changed Deonna’s life,” Reynolds said. “It changed her trajectory in everything, and it was fun to see how she blossomed these last couple of years.”

The fall 2020 season was canceled because of the Covid-19 pandemic, and the Tigers played a shortened spring season in 2021. By then, Wellbrock had moved into a starting role. With one semester left to complete her degree, she decided she wanted to finish on a positive note.

“I didn’t want to hang my cleats up on Covid,” she said. “I remember calling my mom after that last game in the spring and saying, ‘That’s not where I’m ending my career.’ ”

That decision meant a lot more work for Wellbrock, who was determined to be in the starting lineup.

“It was her work ethic this past summer that made the difference for Deonna,” Reynolds said. “I am so happy for she came back one last season. It is so rewarding to get to see the process of growing for those student-athletes.”

Wellbrock received third-team honors in the MIAA while recording seven shutouts and 86 saves – third in Tiger women’s program history for a single season. She led the MIAA during the regular season in both goals-against average (0.80) and save percentage (.849).

“One of my goals was to get some type of recognition in our conference this year,” she said. “Our team was ranked eighth in the MIAA. So to bypass all the goalkeepers on those teams made me happy.”

Possibly even more impressive were Wellbrock’s academic accomplishments – while juggling a busy schedule of a student-athlete. She was named a scholar-athlete by the MIAA and also was named to the CoSIDA all-academic district team.

She is excited about coaching youth soccer teams in the future and passing on what she learned along the way – especially during her time as a Tiger.

“Wow, this has been quite the journey,” she said. “I am so blessed to have gotten the chance to represent Fort Hays State in soccer and to get my degree, too. I’ll never forget my time here at Fort Hays State. It’ll always be a part of me.” 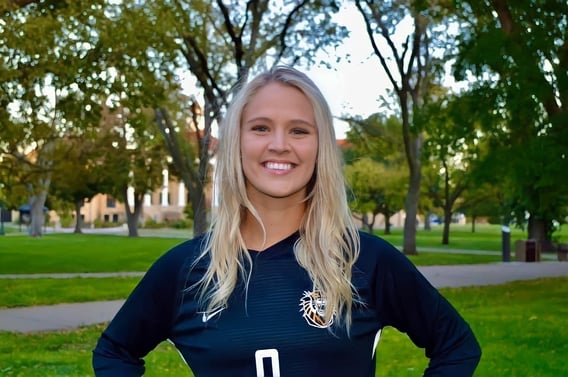